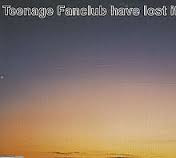 I visited the Oxfam music shop on Glasgow's Victoria Road at the weekend.
The vinyl prices have gone crazy. What used to be a pound is now three, three now six with some reasonably bog standard second hand records going for upwards of twenty quid.
I suppose they are charging what some folk are willing to pay.And hey it's for charity although I always see Oxfam more as a multi national big business that a charity but maybe that's just me.
I restricted myself to the three CD singles for a pound section with 6 purchases that will feature over the next few weeks.
Teenage Fanclub Have Lost It is probably technically an EP given that it has four tracks
From 1995 on Creation it contains acoustic versions of  previously recorded songs.
Here are the first two -Don't Look Back (from Grand Prix ) and Everything Flows (from A Catholic Education)
Tracks 3 and 4 will feature shortly.
Seven quid on Discogs!

Teenage Fanclub - Everything Flows
Posted by Charity Chic at 08:00