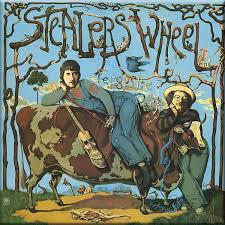 Today's post is inspired by two recent BBC Scotland television documentaries.
The first was Paisley: The Town that Thread Built telling the story of the textiles industry in the Renfrewshire town of Paisley and in particular the influence of the thread manufacturers J&P Coates who at one point were the third largest company in the world
There was a massive mill in Ferguslie Park which has now long gone and Ferguslie Park is now identified as the most deprived area in Scotland although some excellent regeneration work is underway.
Gerry Rafferty and Joe Egan of Stealers Wheel were both Fegs as was the artist John Byrne who designed the cover of their 1974 album Ferguslie Park.

John Byrne also popped up in another documentary as he was one of three artists (the others being Jack Vettriano and Rachel Maclean) commissioned by Glasgow to paint portrait's to celebrate the 75th birthday of the legend that is Billy Connolly ( make that Sir Big Yin)
Not content with commissioning the portraits the city has had then put up as 50 foot murals on gable ends across the city here
Makes you proud to be a Weegie!