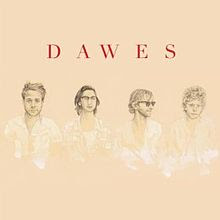 I got North Hills the 2009 debut album by Los Angeles band Dawes out the library a few years ago and have only ever given it a couple of cursory listens.
I put it on the other day and was immediately hearing comparisons to the music coming out of Laurel Canyon in the early 70's which let's face it is no bad thing.
I can also hear comparisons to The Low Anthem Maybe it's just me.
I'm not familiar with any of their other stuff and I see that there are a further four albums out there. Some further exploration is clearly required.

Dawes - When My Time Comes
Posted by Charity Chic at 08:00