This is the Story 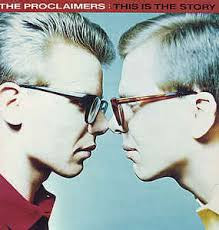 BBC Scotland appears to be on a bit of a roll at the moment when it comes to documentaries.
In addition to the two I mentioned on Sunday tomorrow night sees The Proclaimers: This is the Story commemorating 30 years since the release of their debut album of the same name.
At the time many folk saw the Auchtermuchty twins Craig and Charlie Reid as something of a novelty act and I suspect that a few still do.
The reason? They had the audacity to sing with a Scottish accent something that was pretty rare if not unique back then.
If you think of all the acts that have followed who are happy to sing without bastardizing their mother tongue we surely owe them a debt of gratitude for not  flattening all the vowels and throwing the R away.

The Proclaimers- Throw The "R" Away

The Proclaimers - Over and Done With
Posted by Charity Chic at 08:00