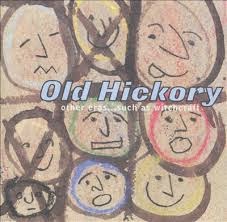 To the best of my knowledge  Other Eras ...Such as Witchcraft from 1997 on A&M Records is the only album ever released by Old Hickory.
I have been able to find out next to nothing about them other than they were a 5 piece American band
One of the few reviews I could find describes them as Alternative Indie Rock and Post Grunge and goes on to state:
The band serves up their pop with a fuzzy, other-worldly, feedback-laden buzz that is anything but bubblegum. The result is fairly psychedelic--infectious pop hooks woven around some seriously spacey guitar layers, a combination that hasn't been this well-explored since the arrival of the Flaming Lips. From the Replacements-esque "Spur Eye" to "Settle Down" and "Broken," which are clearly influenced by Pavement, Old Hickory cranks them out with just the right balance of sonic grit and winning pop sensibility. Bose

For me I can see some comparisons to the heavier end of Americana such as Wilco and in particular Centro-matic.
Not bad at all.One more to go

Old Hickory - Diamonds or Coffeecake
Posted by Charity Chic at 08:00