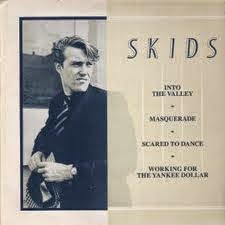 I've finished In a Big Country the biography of Stuart Adamson by Allan Glen.

It is ok as biographies go with the careers of the Skids and Big Country recorded in chronological order and a decent discography.
Disappointingly none of the members of either band were willing to participate in the book and the material is gleaned namely from the music press and local newspapers.

As the book points out it was no surprise that a member of the Skids went on to have a successful career in music. It was a bit of a surprise at the time however that it was Adamson as opposed to Jobson.
Jobson and his enormous ego went off to do TV and film gradually disappearing up his own backside.
He did write some great tunes though!

Skids -Working for the Yankee Dollar
Posted by Charity Chic at 08:00