The Pride of Dunfermline 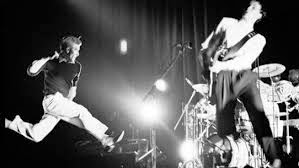 I have just started reading In a Big Country a biography of Stuart Adamson by Alan Glen.

He was part of the two biggest bands ever to have come out of Dunfermline namely the Skids and Big Country.
Nazareth, Jethro Tull's Ian Anderson and Barbara Dickson are probably the only other artists of note to originate from this Fife town which was once the ancient capital of Scotland.

I've got as far as the Skids section and I must admit that I prefer them to Big  Country.
The book had me reaching for a four track EP released by Virgin in 1983 which could be said to be a mini Best of.
Side 1 today with the mighty Into the Valley, still blasted from the tannoy at Dunfermline FC  home games, followed by the not quite so mighty but still pretty impressive  Masquerade.

Skids - Into The Valley