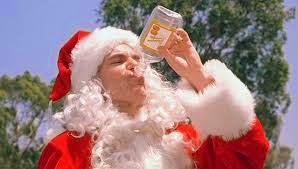 Time to raid the Christmas CDs for this week's Saturday Lucky Dip.
Mrs CC came home the other week with a couple of compilation CDs including Home for the Holidays.
A pleasant piece of easy listening.
Whilst some of the usual suspects feature - including Santa Baby and The Most Wonderful Time of the Year -  there are also some new ones to these ears including these splendid offerings from Louis Armstrong  and Lou Rawls.
Neither have featured to my knowledge on the Smooth Radio Christmas station which Mrs CC appears to have been playing from around about October.

Somewhat inexplicably neither Home for the Holidays nor Smooth Radio has opted to feature The Sensational Alex Harvey Band with There's No Lights on the Christmas Tree Mother,They're Burning Big Louie Tonight which is criminally negligent of them.
This comes courtesy of Big Rock Candy Mountain a less than prolific blog but one that comes into it's own at this time of year.

More random nonsense of a non Christmas variety next Saturday
Posted by Charity Chic at 08:00