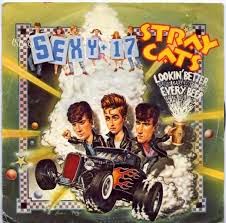 The fourth single in the Stray Cats box and something of a return to form.
From Rant and Rave With the Stray Cats their third album (She's) Sexy and Seventeen was their fifth of six singles to chart entering the UK singles chart on 6th August 1983 remaining in the charts for 9 weeks and peaking at number 29.
Both the single and the  b-side Lookin' Better Every Beer were penned by Brian Setzer.

It was a bigger success in the States reaching number 5  following on from Rock this Town and Stray Cat Strut which were both released in 1982 considerably later than  from when they were hits in the UK.

One more to go.