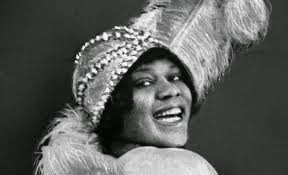 It has been a wee while since The Blues Collection has featured on CCM. It has been  even longer since a female artiste has featured  probably as far back as  Koko Taylor about a year ago.

So it gives me great pleasure to feature The Empress of the Blues herself the great Bessie Smith.
Born in either 1892 or 1894 (accounts vary) in Chattanooga, Tennessee she died in 1937 following a car accident near Clarksdale.

Hugely popular in the 1920s and the 1930s as a Blues singer and as a major influence on the burgeoning jazz movement she generated a degree of controversy due to her bisexuality and relationship with fellow singer Gertrude Saunders.

The two songs featured are from the 1920's and the quality of recording is pretty impressive given their vintage.
From 25th August 1928 and recorded in New York we  start with Me and My Gin.
This is followed  by Kitchen Man again recorded in New York, this time on 8th May 1929, a song brimming with innuendos, double entendres and euphemisms.

Bessie Smith - Me and my Gin