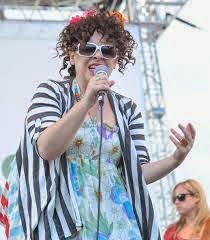 Those of you who survived the Spinto Band have probably opened this post with a degree of trepidation.
I would argue that this week's offering is considerably better- others may choose to disagree.

This week's CD saved from the bin is The Things We Do by Angela McCluskey on Manhatten Records from 2004.
Apparently she is Scottish but is based in Hollywood, California where she is married to composer Paul Cantelon.
She also is a member of the folk rock group The Wild Colonials.
I would describe her music as Amy Winehouse lite  - pleasant enough but obviously not in the same league.


Angela McCluskey - It's Been Done

Angela McCluskey - Love is Stronger Than Death
Posted by Charity Chic at 08:00