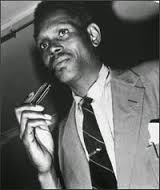 Described by Willie Dixon as the best harmonica player he had ever heard Big Walter Horton never quite enjoyed the commercial success of some of his peers
Born in Horn Lake, Mississippi in 1918  he was playing harmonica by the age of five prior to moving to Memphis as a teenager and was one of the first artists to record at Sam Phillips Sun studio
Like many other Southern musician he graduated to Chicago and became part of the Blues scene there
He was also known as Mumbles and Shakey because of his head motion whilst playing the harmonica.
These two tracks were recorded in the splendidly named Knickerbocker Club in Boston in 1980 shortly before his death in 1981 at the age of 64

Walter Horton -What's On Your Worried Mind
Posted by Charity Chic at 08:00