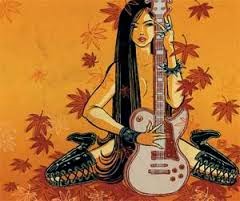 This week we change magazines and it is the turn of The Word with Now Hear This from August 2008.
Now I am unfamiliar with The Word and don't recall ever having purchased it.
Which is a shame as I have picked up a couple of their compilations recently and they are a fine eclectic mix.
They come in a cleverly designed cardboard sleeve with lovely artwork by Yuko Shimizu an example of whose work is featured above.

As the weather appears to have taken a turn for the better I have selected two tracks which I know nothing about but which have a distinctive summer vibe.
El Arbol is by LA artiste Ersi Arvizu from her 2008 album Friend For Life. Turns out she is lead singer of El Chicano who were on the previously featured Chavez Ravine album by Ry Cooder.
The Apples have certainly never featured before.They are a nine piece Israeli funk band with Upskirt appearing on their third album Buzzin' About from 2008.

The Apples - Upskirt
Posted by Charity Chic at 08:00