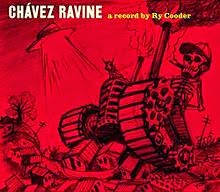 Chavez Ravine is a concept album by Ry Cooder which tells the story of a Mexican American community demolished in the 1950's supposedly to make way for public housing
This being America and in the 50's the project ground to a halt given fear of communism and  the belief that  public housing  somehow equalled  socialism.
Meanwhile the majority of the residents had been relocated thus destroying a community.
The LA Dodgers baseball team subsequently built the Dodgers stadium on this site with  the help of public money and some political skullduggery.
I assume that  you are re-assured that something similar would never happen in your town or city ........ right?

Ry Cooder - It's Just Work For Me

And yes, before anyone asks, that is indeed the mighty Flaco Jiminez on the accordion on the first track
Posted by Charity Chic at 08:00