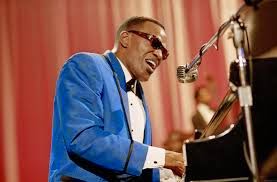 Along with Sam Cooke Ray Charles Robinson was responsible for the origins of soul music by bringing gospel songs to a wider more secular audience.
For I Got a Woman he adapted a traditional gospel song putting secular lyrics to it and turning it into an r&b number.
After that he could do no wrong and for the next ten years or so his success was without artistic or commercial parallel within the black community.
He was also one of the first black artists to succeed in the crossover to being acclaimed by white audiences also.
This may partly be due to the range of his music - jazz, blues, soul, gospel and pop. He even came up with the great 1962 album Modern Sounds in Country and Western Music for goodness sake.
Blind for the age of seven, he was also a heroin addict for over 20 years which ultimately impacted on his career

Ray Charles - I Got a Woman