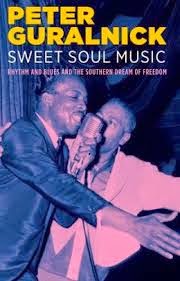 I've just finished reading Sweet Soul Music- Rhythm and Blues and the Southern Dream of Freedom by Peter Guralnick and very good it is too.
I got it following a recommendation in a post on the excellent Funky 16 Corners blog.
It has sections on the giants of Southern Soul most of whom have already featured in this series.
It also gives detail of the influence of Muscle Shoals, Macon and Memphis and the rise and fall of the Stax empire.
As with all such books I was familiar with some of the content but had learnt a great deal more by the time I have finished reading it.
I was aware of Sam Moore and Dave Prater, for instance, but had no idea as to how absolutely huge they were as the most successful soul duo and second only to Aretha in terms of chart success.
Also terrific live apparently and often preceding Otis at shows making him perform to an even higher standard so as not to be outdone by them.
Here is I Thank You one of their biggest hits and an Isaac Hayes and David Porter production of I Can't Stand Up For Falling Down which knocks Mr Costello's version into a cocked hat..

Oh, and I also found out that Rothesay's finest Lena Zavaroni was at one time signed to Stax!!

Sam and Dave - I Thank You

Sam and Dave -I Can't Stand Up For Falling Down
Posted by Charity Chic at 08:00