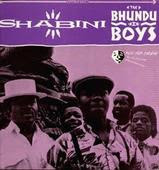 Back in 1986 John Peel and Andy Kershaw in an advanced state of excitement introduced The Bhundu Boys to an unexpecting  British public and it was like an electric shock.
From Zimbabwe, though somewhat bizarrely based in Hawick in the Scottish Borders, they introduced us all to the Jit jive.
Their classic 1986 album  Shabini on Disc Afrique is nothing short of a masterpiece.
I am posting the first track Baba Munini Francis - about an unfaithful woman and a mystery "uncle"
In truth I could have played any of the 10 tracks as they are all equally good.
It is a record that no discerning person should be without and I fully expect you all to have begged, stole, borrowed or purchased a copy by the time I return from my holidays in two weeks.