For One Week Only - The Return of Mexican Monday 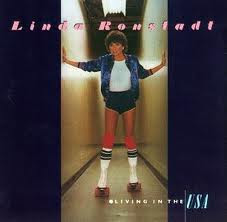 On hearing the sad news that Linda Rondstadt has Parkinsons I decided to resurrect Mexican Monday for one week only.
She joins a long list of people including Mohammad Ali, Michael J Fox and my mother who have this horrible and debilitating disease.
A song from her Mas Canciones album from 1991 would have previously featured on Mexican Monday had I the vinyl converter technology at the time.
The definitive version of Carmelita has already appeared but it is always good to hear another version
I never knew until Friday., courtesy of Ricky Ross on BBC Radio Scotland's tremendous Another Country programme that Linda and James Taylor had provided backing vocals on both Harvest and Harvest Moon.
Every day's a school day
There are no songs featured from the Living in the USA album but the roller skating image is the one I always associate with LR