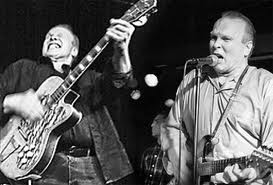 The Blasters concert at Glasgow's Renfrew Ferry (yup a real boat on the River Clyde) is up there amongst the best concerts I've ever seen
From Downey, a blue collar suburb of Los Angeles they formed in 1979 with the main protagonists being brothers Dave and Phil Alvin.
I could wax lyrical as to how good they are but rather you should go out and purchase "American Music" on Hightone Records or if you are feeling flush the magnificent Testament - The Complete Slash Recordings  - a phenomenal 52 tracks on 2 CDs on Rhino.
You will have heard cover versions of these two songs written by Dave Alvin.
He has had a long and varied solo career and his solo stuff will feature on CCM further down the line.
Phil Alvin is now a maths teacher