I have a theory that back in the late 60's /early 70's whilst on tour in Toronto that Link Wray or Dick Dale made the acquaintance of a certain Mrs Good.
This would certainly go some way to explaining the music of the Good brothers Dallas and Travis who make an impressive racket as the mainstays of the Sadies.
This is from one of their earlier albums 2001's Tremendous Efforts (BS 070) 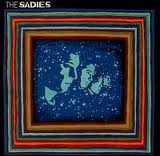 They will feature again as part of Jon Langford and his Sadies fitting perhaps as they consider themselves to be honorary Mekons
They moved from Bloodhot to Yep Roc(another great label ) and then to Outside Music.
As well as Langford they have collaborated with a number of Bloodshot worthies such as Andre Williams and Neko Case.
They sing some good songs but I must admit I prefer their instrumentals

The Sadies - Empty the Chamber.