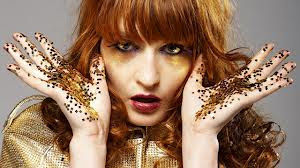 I'm sure that most of you, or the British readers at any rate, will be familiar with   the rise and rise  of Florence and the Machine.
Their debut album Lungs released in 2009 has sold a phenomenal 3 million copies worldwide with the 2011 follow up Ceremonials heading in a similar direction.
This is one of their earlier songs, and in my opinion their best , and shows that Ms Welch's Lungs are indeed in fine fettle.
Purchased for £1.50 at the weekend to replace my library burn
She's got the love but it looks as though her hands need a good wash!

Florence & the Machine - Dog Days are Over
Posted by Charity Chic at 19:57