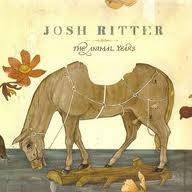 I've long been a fan of Josh Ritter the Americana singer songwriter from Moscow, Idaho.
I've had his 2002 album The Golden Age of Radio for a number of years and recently acquired The Animal Years from 2006
Very good they are too and there are a couple of others in his back catalogue which I have my eye on.
He was briefly married to Dawn Landes, a fellow Americana artist who may well feature at a later date.
He is huge in Ireland apparently
According to Stephen King, The Animal Years was the best album of 2006 and here are a couple of tracks to support this assertion.
Not sure what happened to that horse though!

Josh Ritter - Girl in the War