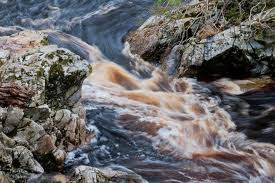 Randolph's Leap is a point on the River Findhorn where it squeezes through narrow rocks and  where legend has it that an ancient chief known as Randolph chased some boy called Comyn who jumped to the other side and ran back to his castle.As old Randolph was the winner in this skirmish the name eventually changed from Comyn's Leap to Randolph's Leap so there you go
Randolph's Leap are also an 8 piece Glasgow based folk/pop band who have just signed to Johnny Lynch (aka The Pictish Trail)'s new label Lost Map..
In the meantime they have just released Real Anymore on Olive Grove records.
This is from their self released Introducing.. Randolph's Leap.
There are obvious comparisons with Belle and Sebastian which let's face it is no bad thing