You Ain't Seen Nothin' Yet 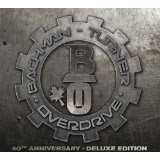 I met a devil woman.
She took my heart away.
She said I had it coming to me.
But I wanted it that way.

I think that any lovin's good lovin.
So I took what I could get.
She looked at me with her big brown eyes and said.

You ain't seen nothing yet

I've got a vague memory of borrowing BTO's Not Fragile and Alice Cooper's Billion Dollar Babies around 1974 from a school chum who ended up as a hippy known as Floyd! Fortunately my musical tastes moved in a different direction
Posted by Charity Chic at 16:13