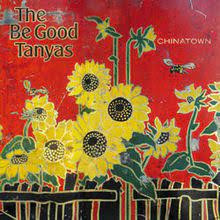 For the second time in as many months Bluegrass band The Be Good Tanyas grace these pages having previously featured as one of the Bands of Canada. I would imaging that their further inclusion will please at least one reader

The band consisting of Frazey Ford, Samantha Parton and Trish Klein only ever released three albums. I've had their 2001 debut Blue Horse since it came out having seen them at Glasgow's sadly lamented St Andrews in the Square around then. I'm not altogether sure why I never got  round to acquiring the other two.

From 2003 on the Netwerk label Chintown is their second album.The album consists of a number of original compositions from Ford and Parton, their take on some traditional songs and a couple of covers.Whereas their original material is good I've opted for the covers. It is the first time that I've heard their version of Townes Van Zandt's Waiting Around to Die and I'm quite taken by it. The other cover Midnight Moonlight from American Bluegrass singer Peter Rowan.

The Be Good Tanyas - Waiting Around to Die

The Be Good Tanyas -Midnight Moonlight